Posted by YoungDayofAllDays at 5:03 PM No comments:

Email ThisBlogThis!Share to TwitterShare to FacebookShare to Pinterest
Labels: halloween

You see, there's a war on, friend! 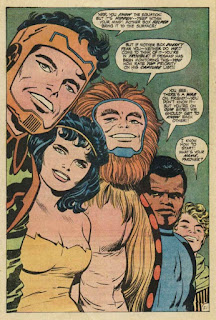 This page from Jack Kirby's "The Forever People" #5 (1971) is my favorite page from a comic in a long time. (By the way, his name is Sonny Sumo, and he's in possession of the Anti-Life Equation.)
Posted by Deutero Isaiah at 11:43 PM 1 comment:

Email ThisBlogThis!Share to TwitterShare to FacebookShare to Pinterest
Labels: honeybadger

This rulez ass. It's the pitch video from Midway arcade games from 1993 to the NBA trying to get player and league licensing. Who did not love some NBA Jam BITD?
Posted by YoungDayofAllDays at 5:09 PM 1 comment:

via boing boing
Posted by shoko at 9:15 PM No comments:

Posted by YoungDayofAllDays at 6:44 PM 2 comments:

The Heart, She Holler


looking forward to this.
Posted by shoko at 11:27 AM No comments:

I'm Allergic To My Tongue

I don't know why I keep posting NSFW stuff, but this one is less NSFW than the messed up thing with the heads in the crotches. This is more like Tim-and-Eric-NSFW. The Chonus is strong with this one.
Posted by Deutero Isaiah at 1:08 AM No comments:

Email ThisBlogThis!Share to TwitterShare to FacebookShare to Pinterest
Labels: shithead

Brian Robison kicks TJ Lang in the nuts, ladies and gentlemen.
Posted by Deutero Isaiah at 1:20 AM No comments:

Email ThisBlogThis!Share to TwitterShare to FacebookShare to Pinterest
Labels: vikings

lost in the harbor

When You Were Mine

This is a great cover of an old Prince tune, off his "Dirty Minds" album. My friend Morgan posted this on facebook. I guess she's going to see them in Portland tonight.
Posted by Deutero Isaiah at 12:58 PM No comments:

I Live My Broken Dreams

oh man this is good
Posted by Deutero Isaiah at 11:52 AM 1 comment:

Since I Met You

This is a nice.. watch a little ways in at least for the change.
Posted by Deutero Isaiah at 10:32 AM No comments:

Email ThisBlogThis!Share to TwitterShare to FacebookShare to Pinterest
Labels: dancing miners, the avalanches

from Buzzfeed
Posted by Deutero Isaiah at 1:29 PM No comments:

The Old89ers Podcast Episode 9 Sure is Ready 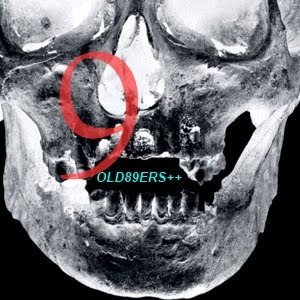 ear candy
Posted by YoungDayofAllDays at 7:26 PM No comments:


great live vid of a great cover
Posted by YoungDayofAllDays at 5:18 PM No comments:

Email ThisBlogThis!Share to TwitterShare to FacebookShare to Pinterest
Labels: The Futureheads

Freaks of the Industry

Email ThisBlogThis!Share to TwitterShare to FacebookShare to Pinterest
Labels: angels, stop hitting yourself

when i call a name

melancholia is now available on VOD and i highly recommend it. if you ever wanted to see lars von trier's version of tarkovsky's the sacrifice this is your chance.
Posted by shoko at 11:52 AM 1 comment:

What once was seen as a traffic problem in Lower Manhattan has elevated into a debate about economic inequality in America, with bulls-eyes trained on the backs of bankers. How else can one explain the sudden explosion of media coverage at Zuccotti Park, the discussion of the protests by the Republican field of presidential hopefuls and a shout-out by President Barack Obama last week?

Still, the media still doesn’t know what to make of this growing movement. Is it a liberal tea party? Is it Marxism run amok? Is it an Arab Spring on Wall Street? Is is a hippie gathering? Will Radiohead show up? Having covered the protests for nearly the month they’ve been camped out downtown, I want to clear the air on some of the myths surrounding this movement in American society and politics.

Myth: The protesters are pushing for anarchy, support violence and communism.
Myth-makers: Ann Coulter, The Washington Times, bloggers, New Hampshire Tea Party, Ron Paul.
Fact: Many of the protesters are seeking jobs, are students or are underemployed. Not one of dozens of Occupy Wall Street protesters I spoke to want hand outs, or to overthrow democracy. Rather, they want a return to a democratic process free of corporate and special-interest money. The protests are a month old and have been mostly peaceful.

Myth: Most Occupy Wall Street protesters don’t know what they’re protesting.
Myth-makers: Author William Cohan, Donald Trump, Andrew Ross Sorkin of the New York Times.
Fact: It’s true Occupy Wall Street has become a melting pot of causes: environmentalism, anti-war peace protest and workers rights to name a few. But the protesters are uniformly opposed to a system that favors what they call the 1%: the super rich who have consolidated nearly 40% of the nation’s wealth. It’s no accident that they’ve picked Wall Street as their base. Big banks are responsible for creating the bubble that led to our recession and high unemployment. Moreover, bank executives who have failed nevertheless continue to get eye-popping rewards: for instance Sallie Krawcheck and Joe Price were ousted from Bank of America Corp. (NYSE:BAC) a few weeks ago. Their exit packages totaled $11 million. The bank lost $14 billion during the last year, announced it will charge debit-card holders $5 a month and is foreclosing on thousands of mortgages. The bottom line: you don’t have to be an expert on the machinations of global finance to know something is wrong here.

Myth: The protest is simply a liberal tea party.
Myth-makers: Me, Joe Biden, Michael Bloomberg, Jon Stewart
Fact: Like the tea party, Occupy Wall Street is concerned about the deficit, the Federal Reserve and mounting U.S. debt. But they don’t lay the blame on a government (they don’t absolve it either). Consider that banking and corporate profits created a bubble during the last decade at the U.S. Treasury through tax revenue. When the bubble popped, it bankrupted the government and thrust us into unsustainable long-term debt and annual deficits that this generation of mostly young protesters will have to pay off. That sounds an awful lot like the tea party with one exception: they have a more sophisticated view of how the U.S. got into this debt quandary.

Myth: Occupy Wall Street is a paid group aimed at re-electing Obama.
Myth-makers: Herman Cain, The Daily Caller blog, Sean Hannity.
Fact: No one is getting paid to protest. In fact, many protesters have sacrificed income to march. Moreover, almost every protester I’ve spoken with has complained about Obama and how he’s pandered to Wall Street interests.

Myth: The protesters are hypocrites. They say they hate the banks, but they bank. They buy from big corporations. They’ve been spotted at McDonalds.
Myth-makers: Ginia Bellafante and Sorkin of the New York Times; Human Events, InfoWars blogs; Bernd Debusmann of Reuters.
Fact: It’s actually true. Occupy Wall Street protesters do buy products and services from corporate America. But does that make them hypocrites? Consider that most of these protesters are NOT against banks. They are against improper actions of banks: foreclosures, inequitable compensation. Nor are they against the bailouts. They just want the same opportunity for homeowners. Would they be less hypocrites if they grew their own zucchini at Zuccotti Park, made their own clothes and all banked at a credit union? The funny thing about credit unions: usually you need a job to join.

And from this example you can see why Occupy Wall Street is confusing to many Americans and threatening to powerful financial interests. In more ways than most Americans know, they are like them. They’re at the mercy of banks and big corporations. With the 2012 election just a year away, Occupy Wall Street has some tough decisions to make. Will they allow themselves to be co-opted by union interests and political candidates who want to turn their numbers into votes? Or will they remain fiercely independent, challenging the status quo? Wherever the movement goes, one thing is certain. Wall Street and Washington are paying attention. And they recognize Occupy Wall Street is a dangerous threat to the system. You can bet that 1% knows that part isn’t a myth. 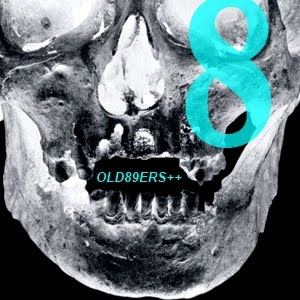 over here
talking rum and hitting
Posted by YoungDayofAllDays at 9:19 PM No comments:

Chris Hedges lays it down 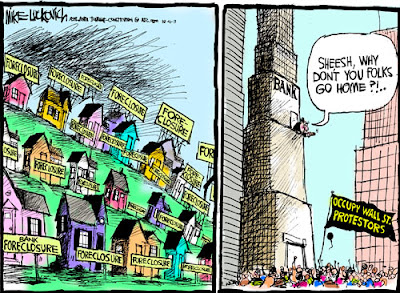 the minnesota occupation begins october 7th at 9:00 am. i can't be there friday but hope to be there in the following days. occupy together has information about other gatherings springing up across the united states.

"Occupy Wall Street is a leaderless resistance movement with people of many colors, genders and political persuasions. The one thing we all have in common is that We Are The 99% that will no longer tolerate the greed and corruption of the 1%. We are using the revolutionary Arab Spring tactic to achieve our ends and encourage the use of nonviolence to maximize the safety of all participants."
Posted by shoko at 10:51 AM No comments:

i see what you did there 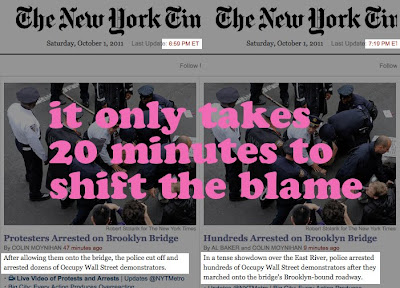 click image to embiggen
Posted by shoko at 10:28 AM No comments: