This is kind of lame, but I liked the Hulk/Red Hulk version of "Black Swan".
Posted by Deutero Isaiah at 11:23 AM No comments: 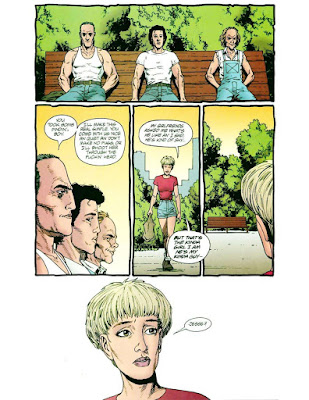 I've been re-reading "The Preacher" and I noticed Tulip singing "Haunted" (that Sinead O'Connor/Shane MacGowen song). I hadn't caught that before. It looks like they have a director for the film adaptation now - I hope they don't fuck that up.
Posted by Deutero Isaiah at 2:03 PM No comments:

Shaun of the Dead Island

I loved that Dead Island trailer, and this is really awesome too. Makes me want to watch Shaun of the Dead again, play Dead Island, and other miscellaneous zombie-related things.
Posted by Deutero Isaiah at 9:52 AM No comments:

Email ThisBlogThis!Share to TwitterShare to FacebookShare to Pinterest
Labels: shaun of the dead, zombies

oh fuck, where am i?

"1889. German philosopher Friedrich Nietzsche witnessed the whipping of a horse while traveling in Turin, Italy. He tossed his arms around the horse's neck to protect it then collapsed to the ground. In less than one month, Nietzsche would be diagnosed with a serious mental illness that would make him bed-ridden and speechless for the next eleven years until his death. But whatever did happen to the horse? This film, which is Tarr's last, follows up this question in a fictionalized story of what occurred. The man who whipped the horse is a rural farmer who makes his living taking on carting jobs into the city with his horse-drawn cart. The horse is old and in very poor health, but does its best to obey its master's commands. The farmer and his daughter must come to the understanding that it will be unable to go on sustaining their livelihoods. The dying of the horse is the foundation of this tragic tale."
Posted by shoko at 4:34 PM No comments:

Email ThisBlogThis!Share to TwitterShare to FacebookShare to Pinterest
Labels: Tyler The Creator

... from Pietro & Wanda Maximoff.
Posted by Deutero Isaiah at 3:57 PM No comments:

I'm not sure if you guys have checked out the work of Al Columbia before - maybe you've read the incredible "Pim and Francie" from a couple years ago...? In any case, if you have a couple hours to listen to a totally engaging podcast interview that he did on Instuds recently, give this link a click:
http://www.inkstuds.org/?p=3378
Posted by YoungDayofAllDays at 8:20 AM No comments:

All The Sun That Shines

Peaking Lights - All The Sun That Shines from Not Not Fun on Vimeo.

Posted by Deutero Isaiah at 12:26 AM No comments:

Email ThisBlogThis!Share to TwitterShare to FacebookShare to Pinterest
Labels: Konono No.1

ufo hovers over dome of the rock